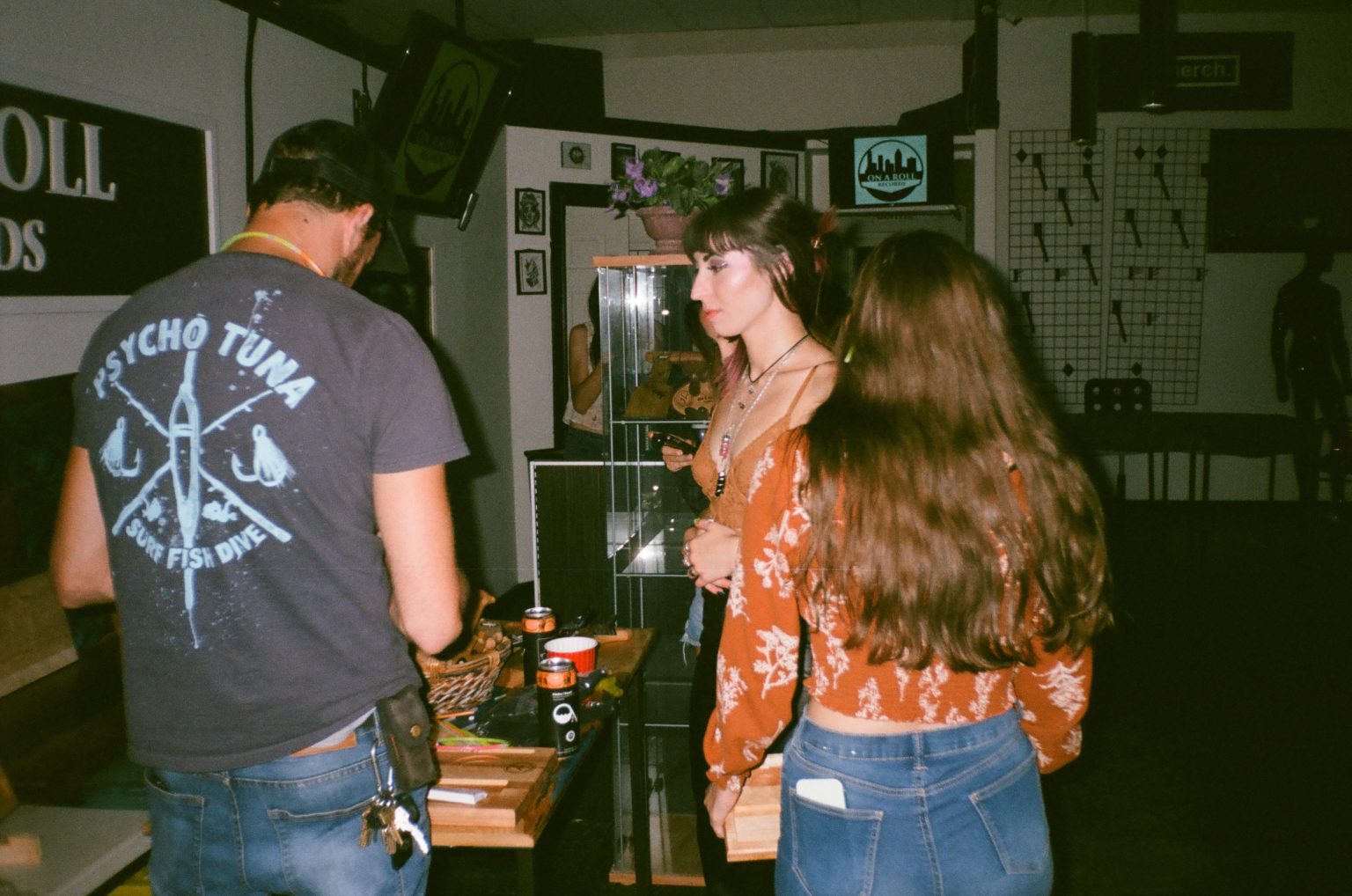 Hello hello everyone! It’s been a while but I am back once again with another blog post for you. This time focusing on the most recent networking event that was held over here at On a Roll Records. On Saturday July 16th, the OAR team hosted the 2nd instalment of their Networking Event series. The goal of these events is to bring together all types of industry people as well as music lovers and fans in a communal space that promotes and encourages networking and forward-thinking. Looking to meet someone in the business side of the industry? Check. Want to have a chance to watch your favourite artist perform? Also, check. Get a tattoo while munching on a fluffella? We got you covered there too. I bet you can’t name anywhere else where you get to do that last one. In case you missed this one, don’t you worry, the Networking Event series is going nowhere. Keep your eyes peeled for future announcements regarding our 3rd edition of the series coming to an office building near you this fall.

Being an event that ran from 3pm all the way until 1am picking a highlight is near impossible. However, if I had to pick something, I would say it’s tied between getting to conduct interviews and the beer pong table. At the networking event, I had the wonderful opportunity of taking over hosting OAR TV’s very own NoeTheKulcha, a show all about the intersection between music and culture. Throughout the event, I think I conducted roughly 13 interviews between all the artists and vendors present. Although, nothing will beat my record of 30+ interviews in 2 days at the 2019 Symposium de L’Espoir. Filmed by the incredible Étienne Durocher and assisted by the wonderful Liam Reid, you’ll soon be able to find the interviews on the On a Roll Records YouTube channel. As for my other highlight, the beer pong table, as much I would love to say that I swept the table clean, my partner Catherine Gagnon and I suffered a terrible terrible loss to Liam and his partner, Jason Lamar from Boiserie-Epoxy JL (do be expecting to hear from us regarding a rematch sometime in the near future). But until then, I guess you’ll just have to wait around for the Networking Event vlog coming soon.

Being a record label, it wouldn’t be a networking event without some musical performances, and OAR was super lucky to have an amazing roster of local artists grace the stage. Audience members got to enjoy performances by event host himself, Sir Louie the Third, BeRosey featuring DJ Sanyo, the beautiful Valerie Pascale, and headlining the evening, duo Frase and Fawna. I don’t know about you but that looks like one hell of an awesome line up to me. We even had alien DJ, ALL Y0R BA55, playing a little set at the event after party. Wondering where you can catch some of these awesome performers again? Well, stay tuned for the release of the On a Roll Records Networking Event vlog on the OAR YouTube page!

On top of the amazing performances, our Networking Event was also graced by the presence of various local Montreal vendors and services. We had everything from tattoos, to clothing, to even some of the best baked goods in the city. Repping the clothing brands we had streetwear brand Creme Clothing with woodwork and epoxy company Boiserie-Epoxy JL just across the room. Fun fact, Jason from Boiserie-Epoxy JL made some custom On a Roll Records merchandising just for the event. Some of the items included a cassette tape rolling tray, a barbecue scraper, a super special Batman inspired bottle opener, and many more. If you just so happen to remember my comment about getting tattooed while eating a fluffella, then you’re probably wondering what on earth is a fluffella. Well, let me tell you. A fluffella is a brownie mixed in with nutella and marshmallow fluff. And yes, it is as delicious as it sounds. This delicious desert is the special creation of the one and only Madame Munchy that we were so lucky to have with us at the networking event. They are also known for being the home of the cookie pie which I also highly recommend trying. To finish off the retail side of the vendors, we had Makeway Studios very own Brandon Hecht and his company Aurum & Crystallini over here promoting their custom jewelry services.

Not only did we have the amazing vendors listed above, but we also had an amazing list of services being promoted at the event. We had the lovely Ivelle Nightmare and her fantastic tattoo skills on site. Video editor and motion graphic designer Bruno Vargas was also here telling us about his journey from the world of film to the world of animation. And we also had newest addition to the On a Roll Records family, Orly Estrin as ThePhotoboxMTL’s newest on site makeup artist.

I would also like to give a special shoutout to St. Luke’s Brewery and Chef Cheesy Puff for providing the staff, vendors, performers, and event attendees with some delicious barbecued goods and alcoholic beverages. St. Luke’s Brewery not only came to the event with their locally brewed beer, but also with their seltzer brand O2V which comes in both peach and watermelon. The peach option is so incredibly delicious that my friend Abril thought it was simply just a can of peach juice. And to be fair, if I didn’t already know that it was 5% alcohol, I would’ve believed her. That’s just how good it was.

It wouldn’t be an On a Roll Records event without something crazy happening on site now would it? This time around we had live tattoos happening at the event. The incredible Ivelle Nightmare who is mentioned above was on site giving the event attendees live tattoos. I may or may not have left the event with a butterfly harp on my left bicep. Between having designed a batch of flash tattoos specifically for the event and taking small custom orders, Ivelle had a line up of customers all the way out the door just dying for a tattoo. In case you missed out on the opportunity to get one of her awesome tattoos, you can hit Ivelle up on Instagram at @ivellenightmare and book your spot!

All these paragraphs later, that would bring me to the end of my blog post. In case all this talk about fluffellas, tattoos, yummy seltzers, and beer pong tables made you feel a serious case of FOMO about missing the event, you’ll have plenty of more opportunities to experience this wonderful event for yourself as On a Roll Records plans on making this a regular thing every few months. So, make sure you’re following us on Instagram at @onaroll.records and stay tuned for news to come!